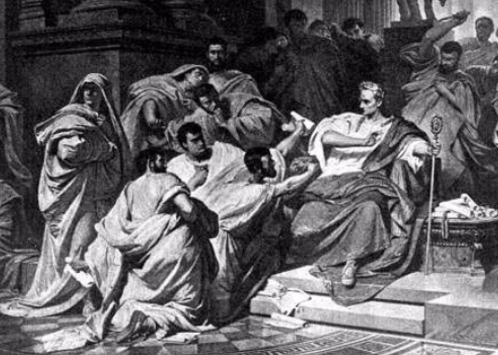 Julius Caesar written by Shakespeare. This Play is based on the real story of great Roman general and statesman, Julius Caesar who died in the year 44 B.C. He was one of the great conquerors of the world. He expanded the rule of the Roman Republic and made its politically stable.

For better control of the Julius Caesar wanted to make it an empire and he himself wanted to be its emperor. The Senate turned against him and he was killed as a result. After him came his grandnephew Octavius who became the first Roman Emperor under the name of Augustus Caesar. Since then the world  “Caesar ” had been used as a little for the Roman Emperors.

No doubt this play is a true account of the real Julius Caesar but it is not history. It is pure literature. It is tragic drama. In the hands of Shakespeare this story has become the gem of literature that beautifully show how deadly the cut is that man receives from a close friend. The scene of Caesar’s murder is regarded as one of the few most pathetic scenes in the world literature.

The conspirator, jealous of Julius Caesar ,work against him under a definite plan. They know that their scheme cannot work until Brutus is with them. Brutus is Caesar’ most trusted friend whom the people equality love and respect. They convince him that Caesar want to become and emperor and its not good for democratic government of Rome.

The conspirator including Brutus stab Caesar in a public meeting. When Caesar sees that Brutus is also one of his murderers. He exclaims in agony , Brutus, you to “ and then dies. It is from this play that this phrase has become the universal expression of deceitful act of a close friend.

.” As he is the best poet of human nature, the speeches that have given to Brutus and Antony   are amazing and highly suit their temperaments and the situations. Brutus is logical and calculating in his arguments because his cool-minded statesman. Antony on the other had knows how to exploit the feeling of the mob. So he succeed in getting the support of the people his fiery speeches reflect the mastery of the great playwright.

The word of Shakespeare’s plays is the true image of the world of man. The world of “Julius Caesar” is full of variety , rhythm and strength . The characters that move in this world make it more life-like. Caesar and Brutus have their human weaknesses and fall a prey to them. The fall of both these characters is convincing and logical.